Not everything you do in the big city is expensive.  The locals have their own ways to get around and find things to do that are low cost and some really neat things to do for free.  One such place is the Cultural Center which has a visitor”s center that will provide you free access to attractions around down, get a visitor’s transit pass to save some money.  At the Cultural Center, there is also an art gallery on the first floor that has rotating exhibits from local artists.  The architecture in the cultural center itself is also amazing and you can just soak up the history while taking a coffee or snack break in the common area offering free WiFi Internet access.  the various ball rooms also plays host to various city functions and public meetings. 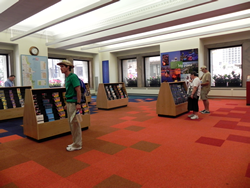 The Chicago  Cultural Center was originally constructed in 1897 as the Central Library of Chicago.  As the city’s population increased over the last century, the central library was relocated to Van Buren.  The country’s top architects and craftsmen used the most sumptuous materials, such as rare imported marbles, polished brass, fine hardwoods, and mosaics of Favrile glass, mother-of-pearl and colored stone, to create an architectural showplace. Located on the south side of the building, the world’s largest stained glass Tiffany dome ― 38 feet in diameter with some 30,000 pieces of glass ― was restored to its original splendor in 2008. On the north side of the building is a 40-foot-diameter dome with some 50,000 pieces of glass in an intricate Renaissance pattern, designed by Healy & Millet. 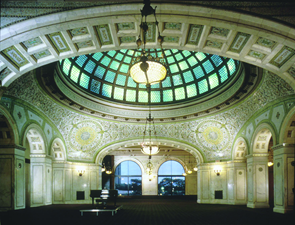 From The North:
If traveling from the North on the Kennedy Expressway or Edens Expressway (Interstate 90/94), exit at Monroe Street and drive East to Michigan Avenue.

If driving on the Outer Drive (North Lake Shore Drive/Highway 41), exit at Randolph Street and drive West to Michigan Avenue.

From The East:
If traveling from the East on the Indiana Toll Road (Interstate 90), take the Chicago Skyway to the Stony Island exit, follow Highway 41 (Lake Shore Drive) to downtown Chicago, exit at Randolph Street and drive West to Michigan Avenue.

If coming in from the East on Interstate 90/94, continue on the Dan Ryan Expressway, exit at Congress Parkway, drive East to Michigan Avenue and then North to Washington Street.

From The West:
If traveling from the West on the Eisenhower Expressway (Interstate 290), which becomes Congress Parkway, drive East to Michigan Avenue, and then turn North (left) to Washington Street. 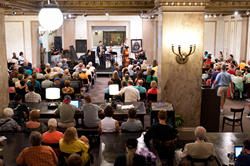 Convenient parking is located in the Millennium Park Garage, Grant Park North, Grant Park South and East Monroe Garages. For more information or directions for any of these parking garages, visit www.millenniumgarages.com or call 312.616.0600.