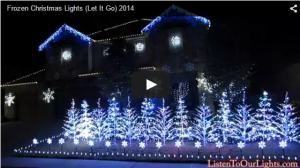 Holiday Light Show Synced to “Let It Go” from Frozen.

Tis The Season and the weather could not be better to go out and take in the holiday decorations and lights around town. Homeowners are putting up their lights this time of the year and of course some of the best holiday light shows from homeowners can be found right on the internet.

“Let It Go” from the Disney Movie Frozen is one of the hit songs this past year (released December, 2013) sang by Idina Menzel who has a fantastic voice and has dawned many Broadway productions that I love. Check out this homeowner’s holiday light show synchronized to this song.

Idina Menzel is a fantastic actress, performer and always comes across to be so humble and sincere when she appears in public like at the recent CMA Country Christmas Show where she appeared with Jennifer Nettles.

And there there are other special performances by Idina Menzel that is near and dear to me from the first Broadway Show I saw “Rent where the audience Mooooo’d with her.

And this performance of “Defying Gravity” in “Wicked” with Kristin Chenoweth who also has a strong and powerful voice.

But let’s get back to the holidays with this special song that Indina Menzel sings with Michael Bubble for the holidays. “It’s Cold Outside”